There’s an amazing thing that happens when one gets on stage. With house lights in your face, your heart racing at roughly 258 miles per hour, sweat beading up on your brow, I believe it is what some people would call a panic attack. I seem to have developed an interesting way to shove that into a box set to self destruct after one actually leaves stage right. But I must confess it doesn’t go without side effects. Last Thursday I had the glorious honor of participating in IgniteCincinnati 9. Now I have spoken at these before, I love the format. 5 minutes. 20 slides. Go. But last Thursday was different. The event was bigger (500+ people). In a massive theater (Memorial Hall, gorgeous). And most importantly, I had no idea what my presentation was going to be when I got on stage. I had to make it up. On the spot. Ignite Karaoke is what they call it, I referred to it as social suicide.

I had been to these before at previous Ignites. Typically, they are trainwrecks that the sponsor seems to make their minions do to embarrass the hell out of them on stage. They are awkward. They are tedious. They are living somewhere between Seth MacFarlane’s Oscar performance and chewing on chalk, but I had an idea. I feel like, no, I knew that I had an idea about why. When I was nominated to speak at this last Ignite, I felt like I simply HAD to give it  a shot. This time though, there was a new twist. This time it wouldn’t be so all over the place, but instead would at least have a topic. Information Overload is Killing Us. Oh, indeed. Indeed it is. You see my idea was pretty simple. Pictures divert our normal thinking patterns and often throw so much dialog into these processes that it diverts us. The random photos up on the stage are, infact, so extremely random that we can’t process them fast enough let alone string them together into a conscious thought. Brilliant, yes..I will take this subject. I will take this gladly. 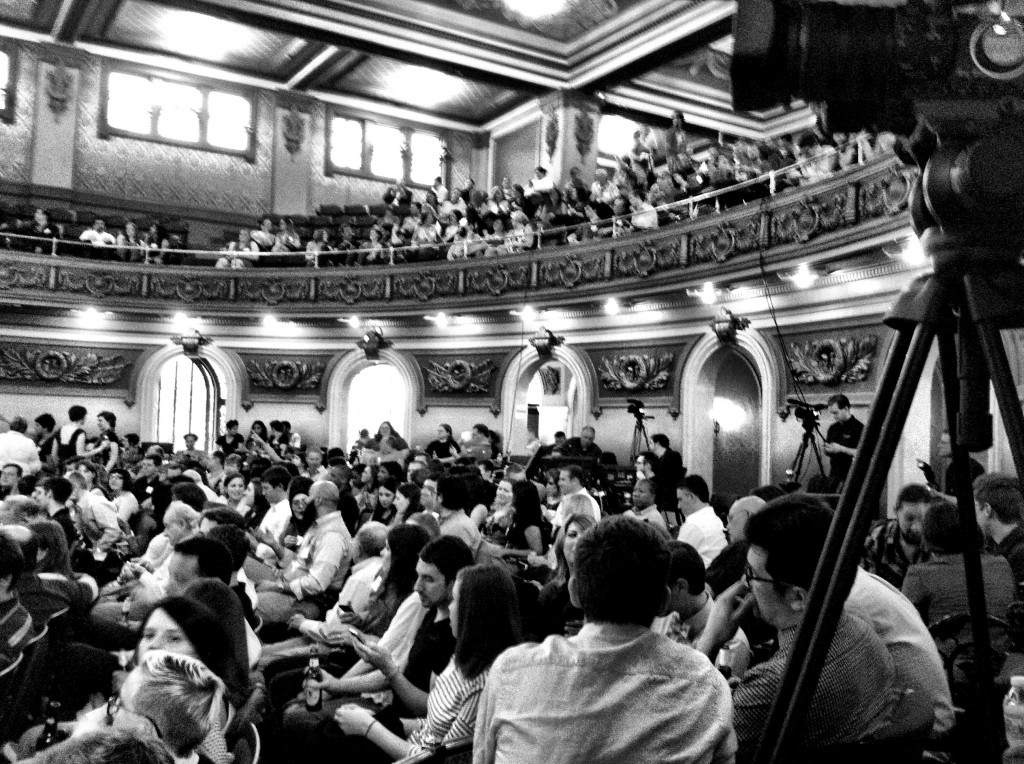 So, the original plan, was to basically come up with a speech, and blindly go into it. Adamantly not look at the slides as they appear, but rather just rant on the state-of-the-crisis that our youth will have to be facing. There was just one, minor, problem. I forgot every damn word.

Yes, that’s right. As soon as I stepped out on stage, and all the stares, and lights smacked me in the face, every single piece of what I was going to say just fell out of my head. Now, what happened was truly a tale to be told, by the Internets, whenever the video gets posted. But I really did want to say something worthwhile, that, as it turns out, Ignite Karaoke may not be the best venue for, cause people want to laugh. And it’s hard to prove any absurd notion when people are laughing. That being said, I give you, what I really meant to say.

To understand this, you have to look at the history of communication. Of sharing stories. It usesd to be knowledge was passed, within the physical presence of another, think the written or spoken word. There was a tactile presence, body language, em-PHA-sis on the wrong si-LAH-bel. And such.

Then, something happened. We started playing with the air, and invented radio waves and phones. Then nearly 1000s and 1000s of years of communicating took a step off the cliff. Suddenly we were in each others ears, around the globe. We opened a blackhole that been gaining speed without ever asking what the consequence will be.

Soon, the greatest/worst invention on the planet, affectionately known as the television would enter the home, and nothing would ever be the same again. Physically written, cumbersome newspapers had to begin to give way to …nothingness as the forms of media began to shift.

Think about that for a moment. Think of all the steps involved in bringing a newspaper to fruition, and to do so at the speed it did was a miracle in and of itself. But you could trust it, it wouldn’t really, lie to you. But those airwaves. Something about the nothingness. It pulled us in like flies to light, and it always…ALWAYS lied.

War of the Worlds. Let it begin.

But we didn’t care. We loved not having to read anymore. It was so much faster. We loved not needing to imagine anymore, the tv shows are doing it for us! I no longer have to close my eyes and paint a world, I can keep them open and peer through this electric one.

But its gotten worse hasn’t it? With TV came 24/7 faster than light information into our homes, then came the internet. It was quiet at first. Too quiet. Infact, it hadn’t really become the absurdly twisted amalgamation until after the quietest day on the planet for me. To my recolleciton anyways. Of 9/11.

It seemed, after that day, we subconsciously made a concerted effort to overshare. To continue to push this “always stay connected” bee hive mantra. Maybe that’s why all the bees left, one look around and they could see the crazy in our eyes. “C’mon guys I’m not liking the looks of this.”

We had a decent handle on technology and information, our generation does anyways. The 30somethings. We lived through Big walkmans and tiny headsets through to invisible music players and massive Beats by Dre enveloping our heads. No I’m not worried about us, I’m sorta/not really worried about the 20 somethings. No, its the kids I tell ya.

Maybe I’ll start to sound like my grandparents here, no I most certainly will, but kids today. Get off my damn social stream you whippersnappers! Perhaps we can trace it back to MTV, the O.G. YouTube, who seemed to prime our inherent A.D.D with 5 minutes “short films” about how Girls Just Wanna Have Fun or Summah, Summah, Summah-times in Philly.

It’s the kids today, who like many adults, face increasingly difficult times focusing, and getting into the proverbial “flow.” You know who you are. You have trouble getting things done at work. You wander during meetings. You tweet while also texting. You take pictures of your food instead of eating it.

You claim you are multitasking. To be clear, you aren’t. You are going through a series of tasks, not necessarily in any order, and those tasks are diverting you from the task at hand. No, you are not multitasking. Only about 2% of the population can multitask, and I’m pretty sure they are all mothers.

No, you lose focus, because you are surrounded by extremely visual, screens. Yes you. You that “doesn’t have a tv” that you proudly tweeted on your smartphone while watching the Colbert Report on your iPad. Nope. You don’t have a tv alright. But you’ve managed to get trapped in one.

And what are we doing, constantly creating new pathways to be “connected” what are the longterm consequences of all of this? We keep bitching about gun control, but mental illness is skyrocketing. Studies show kids under the age of 18 have a hard time focusing longer than 2 minutes when trying to accomplish..a task. A simple one. Like homework. After 10 minutes, forget it. They are lucky they remember their name let alone what they were doing.

Their heads are in the clouds..a virtual one. That we created. Now it used to be a wonderful thing to be in the clouds. We aspired to be up there at one point. We built taller buildings, and flew higher planes, just to challenge ourselves. MANKIND! WE FEAR NOTHING! Now, well, we don’t look up anymore. Instead, we look down. Trapped in a cell.

So in summary, I leave you with this. Data is not information, information is not knowledge, knowledge is not understanding, understanding is not wisdom. Be wise when is comes to how you share your life. With others. With your children. With yourself. Be wise, and maybe we can teach the world how to better understand and communicate with each other.