Soft Launches. Love them or hate them, we all clamor about to be able to preach to the lands that we were the first to taste, see, smell be a part of something you have yet to experience. This, somehow makes us better than you, or at the very least, better at making connections, networking and/or being the sneaky bastards that we are to get a literal inside scoop. Funny thing though, is that depending on the size of place, a “soft launch” event has little to do with the actual experience of a venue, one that I hope this Little Chain That Could is quick to avoid.

Now, there’s going to be plenty of Yelp reviews, chatter, photos and the like about this place. It’s Cincinnati. We are starved for this stuff. Admittedly having heard a Yard House was dropping in on The Banks my immediate thought was “what’s next a TGIFriday’s?.” I generally don’t do chains, but having visited a YH in Denver, this particular chain is slightly different…slightly. Yes, chains provide a level of comfort value going into a strange place. You know what to expect. But on the flip side, you know what to expect. There’s a level of production that is truly just part of the corporate facade. Each one has the same vibe, energy, food, drink. I actually saw nothing in this latest YH to deter that thinking. For once I’d like a chain to embrace local culture a bit, and I don’t mean adding a few taps of local breweries. Seeing as this thing is parked next to the largest tourist draw this side of the river, it would be nice to educate people a bit. But, that isn’t the Bank’s mission. I’ll keep bitching about it, and they will keep not caring as they suck suburban wallets dry (literally once you see the prices here), but the machine churns on. That being said…

The food is great and you can’t beat the absurd amount of beers.

Architecturally, meh. The Yard House sits like a brick next to what I thought would be a standard-setting Morlein House. Amongst the exquisitely designed Smale parks, you will have something that looks like neither a yard nor a house, but rather a foundation for dark concrete monoliths to come. Amazingly sitting like a gigantic chalkboard, it still sits clean, untouched by the various taggers of Cincy as they seem to be distracted marking up places with actual personality in OTR. 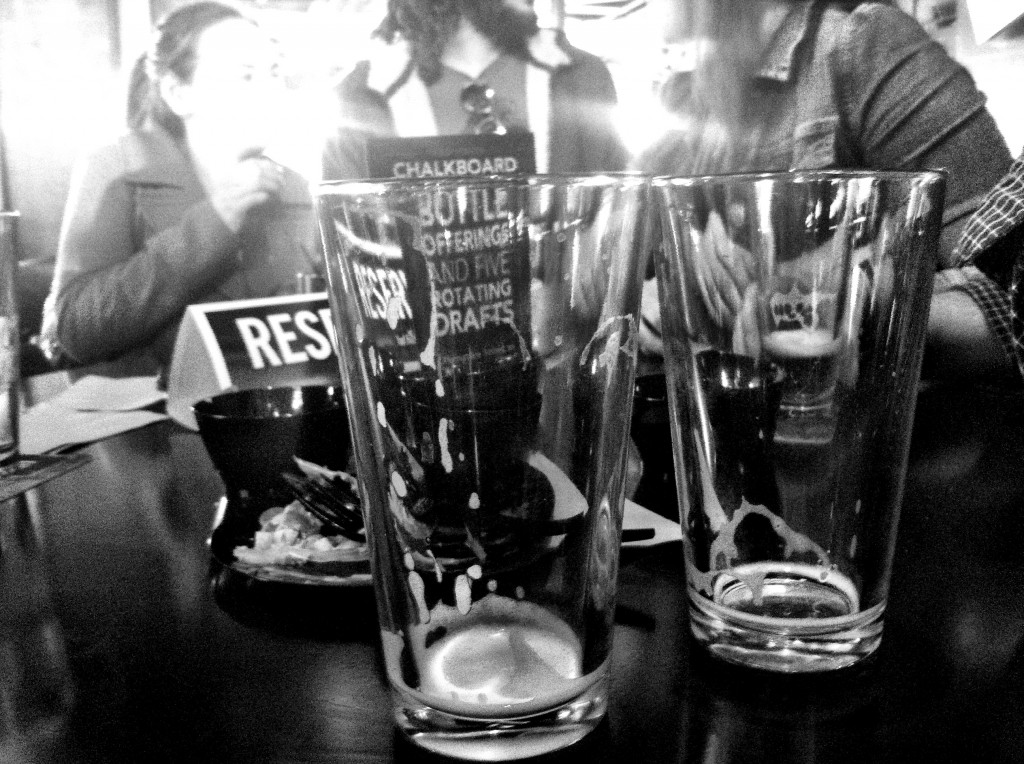 The inside doesn’t offer much in this regard either, unless the personality you are looking for is a pretentious NYer who “crafts beer on the weekends in between his triathlon training”. The selling point of 160+ taps requires a steely ceiling of pipes that vaguely remind me of bad windows screen-savers, lending to the acoustic impossibility of having a conversation. Now, this is also a bad side to soft launches, YOU DO NOT WANT TO BE HERE WHEN ITS PACKED. When will it be packed? Thursday through Saturdays, and probably all Reds games.

However, an interior palette such as this does leave for an interesting effect. The generally neutral tones allow for the people to make the space. The nod here, is that the days collective mass is full of the smartest, most character driven people in Cincy. The bloggers. The media types. The socialites. A veritable who’s who of Whoville all amongst you reveling in amazing conversation about food, about beer, and about injesting such libations and the afterward shenanigans that will ensue. People like 5chw4r7z. People like Charles & Ginny Tonic of the Charlie Tonic Hour. I love these people. Hence why, soft launches are quite deceiving, as you will not see this group of marvels collected until the next soft launch of the next thing by the new developer that most of us will gleam on as it is good for Cincy (it is), but will secretly wish it were something more (we will). Why? Because this city struggles with an identity. It struggles with a stigma. It struggles to maintain a downtown population, while in reality ….world, news flash, it’s not so bad. Does YH help erase the identity crisis? Maybe. A little. We seem to be embracing the brewery town heritage, so it most certainly doesn’t hurt. Can it be more? Absolutely. Am I simply asking too much of one place? Probably.

Other things to be wary of, just like Morlein, the setting sun is not your friend, come with sunglasses. Patience. With 100 blah blah taps to locate, and no discernable logic to their placement other than “by genre”, a bartender would have to be EXTREMELY knowledgable about beers to get to what you ordered quickly. The place is new, and beer-cianados they are not, so help yourself out by saying “I’ll take the Wheat (genre) beer White Rascal (name).” This will knock about 15 minutes off your wait. And as much as I love to drop the “Ah, whatever you think” There is a time and place for that. This isn’t one of them. The bar is too large, the taps are too many and the bartender has better things to do than to figure out your palette.

Finally, the last thing that is tough to gauge on soft launches, cause everything is, you know, free, would be price. When I first moved here a mere 18 (going on 68) months ago, a downtown happy hour lasted 5 hours, and totalled maybe $20. Now this could very well be why every five minutes I trip over some drunk hipster proclaiming his socialist ideals and bitching about the city being overrun by the petty bourgeois, but you will spend $20 in 5 minutes here, let alone 5 hours. As a lunchtime traveler amidst the downtown, this would definitely stretch that weekly budget, maybe even monthly.

So it offers yet another place along the river to go on datenight, along with Montgomery Inn, Morlein, and whomever else they feel like bringing in next. But I offer a challenge. For every Montgomery there is an Eli’s. For every Morlein, there is a BrewRiver. For every Yard House, there is a Terry’s. You don’t have to pump exhorbitant money into riverfront master plans. If you do truly want to show what Cincy is about; what is has to offer. Culturally. Gastronomically. Musically. Don’t overthink it. Don’t over produce it. Create a strip with the energy of Mainstreet USA that doesn’t create the pretentiousness of a forced urban oasis for suburbanites too scared to venture north past 7th street.

Or. Keep doing what you are doing and make millions, as you could drop a froyo down here and it would draw a crowd. Oh, wait.