So, during my vacation I did a bunch of soul searching. When you hit your mid thirtysomethings you have a tendency to do this. Daily in fact. An entire laundry list of items fill this search, but generally coral around the existential, “why have I don’t nothing with my life?” and/or “what the hell am I doing with my life?” I consider both of these quandaries the exact same question, as should you. See my entire existence as evolved around being okay at  a lot of thing, but never really utilize what comes naturally. Well, 30 minutes back in the city that I have grow to love, my bestir Aaron asked me to grab a beer. “Sure, why not, not like I haven’t drank enough in the past 2 weeks, on a beach, in the sun, to do enough damage to whatever is left of my internal organs. Let’s get crafty.” And surprisingly enough, it was the destination, that mused me into writing this. To be fair, it’s a topic I was considering writing on a while ago when I first became learn-ed on the situation, but stayed away for various reason. Well, you know what? I found my calling, and dod gambit, I am going to write about it. There’s only roughly 6 occasional readers of this little blog so it’s not like I’m going to be erroneously offending someone. But this needs to be said, and I am the exact pessimistic asshole to do it. I love urban renewal. I love downtowns. I love creative license. But with great successes, there needs to be a polarizing criticism of what is being accomplished. Don’t worry. My opinions will change nothing, much like many other critics of the world. But we won’t learn unless things are questioned. So I take my new self-appointed position as a critic of all things Cincinnati. I do so, knowing very well, that I care about what is going on here very much, have found, in the past two years here, that it has, and will continue to flourish. So criticism at this time, should be taken with a fair amount of aloof. I am but a mere outsider, and like all critics, I don’t know the full story of the why’s or how’s or what-happened-heres. I am simply reacting to my experience. Enjoy, and feel free to rip me a new one below. 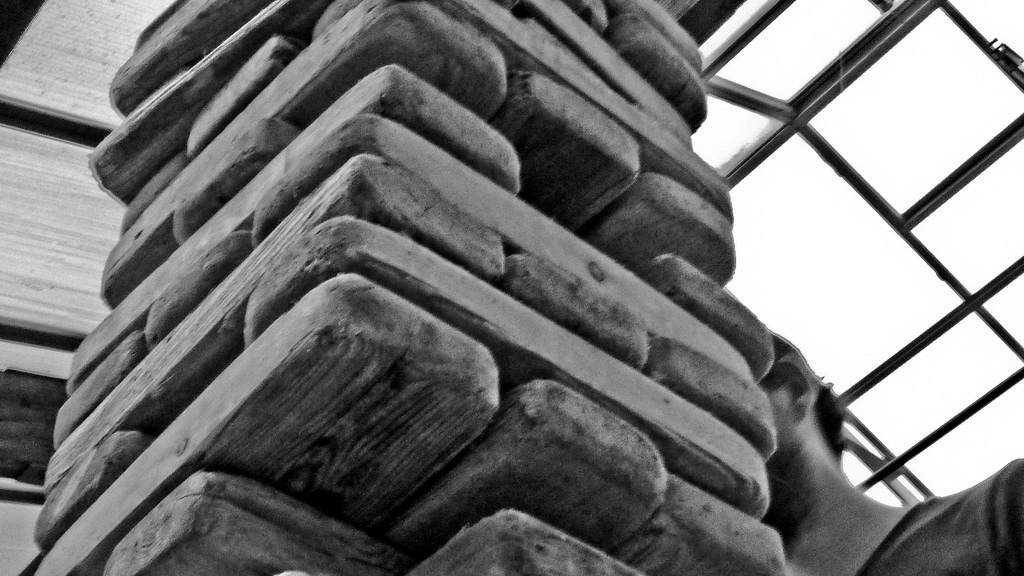 I say this with the utmost love. You, were the first bar to accept me, and I you, when I first stumbled into this little one horse town. Having made my living in Philly, sauntering about the various dives and social scenes that did not require expensive tastes or backdoor password knowledge, I found you to be the perfect home to plump my bum. Your bartenders have just the right amount of attitude with the smile to match. Your craft beer selection was unique. Your ambiance was rustic and comfy. I found myself here daily even though there was no happy hour special (I have learned much since). But considering your craft beers were still half the price of Philly’s it seemed like the place to be. I suppose I should have picked up warning signs back then, the little “tweaks” that kept happening from time to time. Out door bar expansion, more seating outside. More mega Jengas. More, more and more craft beers coming in daily. Then, the one thing it was lacking, the one thing I truly missed form back home, was a bar with food. And it seemed as though your management/ownership had plucked into my brain mass and yanked that very thought, as moments later, Bill’s grill arrived.

All these changes, seemed innocent enough. Hell, my brain matter was asking for them constantly, which is what blinded me to the onslaught that was forth coming. Now, it’s safe to say, you’ve gone too far. The only thing that is the same are the bartenders, and depending on the night, you might not even get a chance to get within 10 feet of them to get their attention. The regulars you may have met in passing have become a revolving door of empty nesters, hipster-for-if-only-a-day, and people who simply needed to “find this place cause Yelp said so”.

I had learned to adapt to the changes. Hit it up early on Friday and Saturday (if you must), be out by 8pm and all will be well. But, some more lights must have flicked on above Neon’s owners heads, cause now, even that routine is shattered. Part of me, definitely wanted to not even bother going into this, but after a return from the shore, helping my family re-establish it’s small business for the season, I don’t know. Perhaps the chord that was struck here just needs playing out. So here goes. You fucked up the food. Again, I go into this, not knowing a single fucking thing about the politics or decision making going on there. But hear me out.

When I heard Eli’s was opening a spot in OTR, my initial reaction was AWESOME!! which simmered down quickly to waitaminute after my knowledge of development and expansion hit the ole noggin. When Eli’s released their “sorry guys, it’s not happening” letter, you could literally feel a tremendous weight, lift off the shoulders of the owners who seemed flat out daunted by the task of expanding. Expanding is no laughing matter, and I applauded the honesty and depth of their explanation, they truly thought it out. Now Eli’s (which is an article to write about unto itself) could focus more on their current location without messing up, what in my mind is, BBQ gold. Then, Neon’s announced that they were going to feature Eli’s at the grill starting this summer.

I don’t know why, but my immediate response was being irked. I felt completely jaded, like the letter Eli’s released was a lie, and that Neon’s was just injecting a steroid into their already strong pectoral hold on OTR. On the Eli’s side, it seemed like they had no idea what they were getting into. They have been there on a Friday and Saturday night, right? The numbers Neon’s packs in in a two hour window is easily triple that of their entire day at the river location. So food wise, the quantity and prep alone is enough to damage the quality, which was, to my understanding what they were trying to avoid by not opening an OTR location. My mind flipped into store manager mode, and numbers started flying and, I don’t know, it just didn’t seem..at the time, like a brilliant idea. But, there are pros, maybe now the river location won’t be so packed. Maybe, Sunday afternoon Eli’s with a bloody mary will be just what the doc ordered. Who knows.

I started to try to balance that idea in my head. It still didn’t quite sit. Something is happening in OTR that needs to be brought to light. While the growth is being carefully monitored and repelling “chains”, the popularity of the independents is creating chains. How many Taste of Belgiums must we endure? How many similar restaurants owned by the same owners are going to spawn? Yes. Success should be rewarded. Stephen Starr owns pretty much every eatery in Philly, and he does so with the bravado of a man that, well, owns every restaurant in the city. But they all have his indelible over-produced fingerprint on it. It’s like watching a soap opera versus a night time drama, you can tell the difference simply by the film quality. I guess my point is, Bill’s grill had a unique fingerprint that fit perfectly with the vibe of not just Neon’s, but what OTR was about. Or at least the original spirit I felt 2 years ago. The 40 or so condiments representing the endless possibility. The “little bit of everything” for the meat eater and vegetarian alike without getting too crafty. The independent entrepreneur, who saw what we call in the design business, an “opportunity space”.

But in one fell swoop, and don’t sugar coat it, it was most certainly a swoop. Neon’s opitimises what OTR is unfortunately headed towards if it stays on this path. Forcing out of independents for others with brand equity. Less choices on the menu, and more of “this is what I’ll be serving you” this evening. And in the end, less possibility.

Tonight for instance, we were graced with $6 burgers that were in some manner “special” because they had caramelized onions on them, some sort of aoili sauce and were, “hand-pressed”. The result was something resembling mustard on a patty half the size that Bill served, over-cooked, and $1 more for the potato chips. Are you serious? Don’t get me wrong, I hate potato chips, but when you are three craft beers in and buzzing like a swarm of bees, they are the greatest thing on the planet. But now, after throwing the chip bags at us for free for two years, now, NOW they are $1?! I also don’t get my choice of honey BBQ jalapeño mustard? Or relish? Or pickle wedges? I kinda just wanted a sirloin burger. Or a Zee burger. But this is the problem, late night eats are hard to come by in OTR, on a Wednesday, so we are left with whatever they feel like serving. Or tacos.

I’d complain, but odds are whoever is running the show wouldn’t hear me over the absurdly loud live music blasting out on a Wednesday night. Shit, did I just walk into Motr by mistake? I must have, cause if I wanted live music I would have gone there. But I didn’t. I wanted to sit outside, grab a decent, affordable craft beer and a decent, affordable grilled burger, and have indecent conversation with my friend that i haven’t seen in two weeks. Now where is a guy to go? Neon’s, you’ve become your very own mega Jenga game. Pieces inexplicably balanced here and there. Pulled willy nilly by overly intoxicated fellows who claim to be engineers aka know-it-alls in their real lives. While also playing the urban hipster card thanks to their JackThreads app. Thank you Macklemore, for informing the bro’s and bro-ettes on thrift stores. Cause Urban Outfitters clearly wasn’t hitting them all. Ok, now I’m ranting. I apologize. I know change is inevitable. It comes with the rapid growth the area is experiencing. What I was hoping would come with growth is diversity, without the loss of identity, but I guess sometimes that’s just asking too much.

I know I am going to get flack for this article. It’s fine. I can take it. Again, I say all this with the utmost love, and respect for the community and what it has accomplished in such a short time. I guess, like most loves in my life, it changes because it wants to keep things fresh and different. I just want them to know, that, they didn’t need to keep changing, we liked you just the way you were, well, except for the bathrooms. Thanks for finally tackling the obvious.