I just, don’t. It really is hard to process what my eyes are allowing into the realm of visual cortex. Honestly, I haven’t felt this disturbed since my problem understanding basic algebra back in the 5th grade. THAT moment I recall vividly. I couldn’t sleep. I would squint all the time. I cried when I was doing my homework. My own mother went to the teacher and insisted I be brought down with the other kids. For my own health. The teacher refused, saying she knew I could do it. That while I might be struggling that my brain, for whatever reason, would catch on. That I had shown some ability somewhere along the line to do so.

Tonight. My brain was right back in grade school. What lay before me, as I pedal through the dust and sand into the blackness ahead, was a completel auditor and visual quagmire. It was like Adafruit had genetically engineered a Lady Gaga daydream which was currently copulating with Ibiza circa 2002. It was beautiful, random electric mist.

“Where should we go?” Donovan asks, assuming I am in a state of mind to answer a question with logic.

Normally I would have some snarky wise-ass comment at the ready. A device many use to either hide or deflect questions that have either a. an obvious answer or b. an aloofness that neither party cares to elaborate on. But I. Had. Nothing. A zombie could make more of an effort at a structured statement than I could have at that moment. That is to say, even my grunt was confused. You see there are many sensory things happening at this very moment. Let’s start with depth and scale. During the day, when all is visible, the Man as the tallest thing in all the land sans distant mountains, if he will beg my pardon here, looks smaller in person. His 100 ft stature easy halves itself with no real discernible landmarks close by as a point of reference. At night, well, at night we are floating in a void.

Just as the desert absorbs all sound, it seeming does the same with light. The black offers a tremendous backdrop for the luminescent wonders that are swimming about. Swimming is the best way to describe it. I know my feet are on ground. The rough road shoving the bike seat up my ass is a constant reminder of that. Don’t you worry. But in gazing out to judge direction and distance, the lights that adorn, every, single thing, dance about much like I would assume the dance goes in the waters of the deep. It’s a shame most of these LED creatures that are trolling about only exist along an X axis. Fo rthe sport of it I lay my head on the playa floor to change it to a complete up down. There really are no words.

We venture into the think of it. LED bike monsters crowd the streets. Keep in mind, only half BRC’s population has made camp by this time, and more are trickling in by the minute. If you aren’t fully aware while cruising around the esplanade at night, I can very easily see how someone could be seriously injured, or even killed. It’s basically large schools of metallic fish roving about with no direct purpose or general direction. It pulses in waves. A few of the daring slice across the diagonal away from the mobs. What’s more scary are the close encounters with the un-lightened. Those caught out before sundown without any glowing wares of any kind. It’s damn near suicidal.

As we shift closer to the camps and structures, the lights begin to take form. Is that a yacht? “HARD LEFT!! PAC-MAN GHOST COMING UP THE RIGHT SIDE!!” I nearly collide with a giraffe. Yes a giraffe. I yell for Donovan to stop. I needed a minute. As I catch my bearings Pinky slinks behind me. Chasing 3 bikes with pro monkey lights on their back wheels with a pac-man on them. “Gah, this is chaos.” I mutter under my breathe. Suddenly a gigantic neoned 18-wheeler dressed as a bull slips by. Followed by Discofish. “What the HELL is THAT thing? Ok, ah. I need a drink.” I can assure you, I was on nothing. Having never had any type of game or video driven seizure in my lifetime, I was pretty sure I was near one. I literally was having the social anxiety ripped form my body. Exorcised. It needed to happen, but I also needed a minute, and some lubricant for this to happen.

We went to one of the many camp structures shooting fire, playing some progressive house (Is that Dave Ralph’s Love Parade?) and offering a tropical punch, of sorts. It felt good to get off the bike. In the darkness of the “parking lot,” my headlamp shot out like a beam, filled with all the lovely dust you can’t see during the day. It swarms the light like little mitochondrians. Suddenly my mind starts to make connections. Ok, so from here out think sideshow carnivals, only with a lot more propane. Steampunk on steroids. Imagine Times Square come alive, like King’s Maximum Overdive. You always wanted to live in imagination. Here’s your chance. Sure enough as I look up, the stage is a massive laughing clown face with chaser bulbs spelling out the camp name, girls dressed as dolls and tokyo-poppish Sailor Moon knockoffs dance under the DJ who barks at the crowd and smashes down on a button that blasts fire every time Katy Perry yells roar. The heat. My god the heat, it feels so good. Wait. Why does the heat feel good. Holy crap it’s getting cold out here. Cold in the desert. My subconscious inner voices (there are two, one gruff and confident, the other kind of an obnoxious brainy surf) both shout in unison, you are on your own on this one chief, we got other shit to worry about.

Across from the technopop cotton candy garden was a thrash metal mosh pit. The humor of this is not lost on me. We kicked off onto our bikes once more and almost immediate passed a geodesic dome where people were dancing to..is that salsa? This place literally has everything. All cultures all favs, all beliefs. All living in 1 albeit tightly packed few square miles. And more importably, for the most part, we all get along? The world could learn a lot from this place. Then again, it might have a difficult enough time wrapping its head around it. I know I did.

A full night of exploration unveiled completely new interactions to the playa art. What was fairly innocuous during the day, was a full sensory experience at night. What was to be looked at for craft, was now meant to be touched and held. It was in a word, (that cannot do it 1 % of justice) incredible. “Dude that’s totally Elon Musk’s yacht!” Donovan screams above the sound garden (yes, I’m in a very literal sound garden). Since I am pretty damn sure John Digweed is actually the DJ on said yacht, we break for it.

“Let’s get on that damn yacht.” 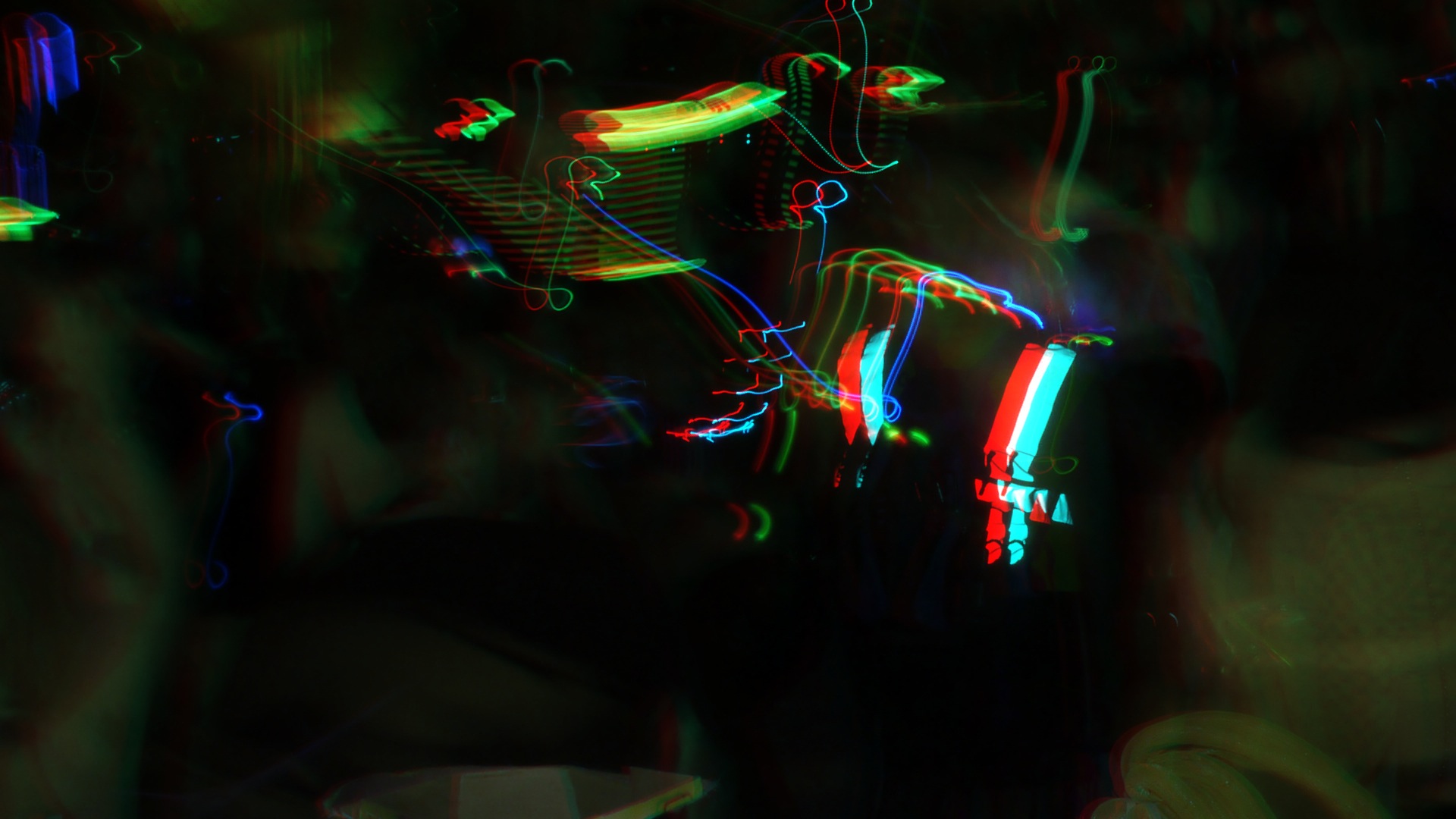 We shoot daringly across the playa. Avoiding the dazed and confused. Wait was that a Thunder Do…nah, never mind. A structure still silent and dark would have to wait to be explored. There is a badass yacht cruising across the desert with some of the sickest sets I’ve heard in a long while, and I’m going to get on it. We finally catch up to it, my brain is in action movie mode as we slip into it’s imaginary wake, I wonder what to do with the bikes. Oh. Nevermind. No mutant vehicle is work it’s salt, unless it has a place to house your ride. Sure enough, just off the back of the yacht, were some rather large spikes. If one was adept enough you could jump off your whip, throw it onto a spike, and shoot up the precariously attached stairs.

“Ah, what the hell.” Jump. Lift. Set. Run. Climb. Soon I found myself on the bow of a 60 foot yacht, with speakers cartoonishly strapped to the front, and dozens of people in swimsuits dancing across the bow in fur coats. “Oh, so this is was DiCaprio meant.” I can’t recall where this boat took us, or how long we were even on it. I lost track of all space and time. My perception was starting to shift. More dimensionality was coming into play. Jesus this is only the first night. Donovan leans over, “we’re at burning man duuuuuuude.” he actually whispers this time.

“Yes. Yes we most certainly are.” 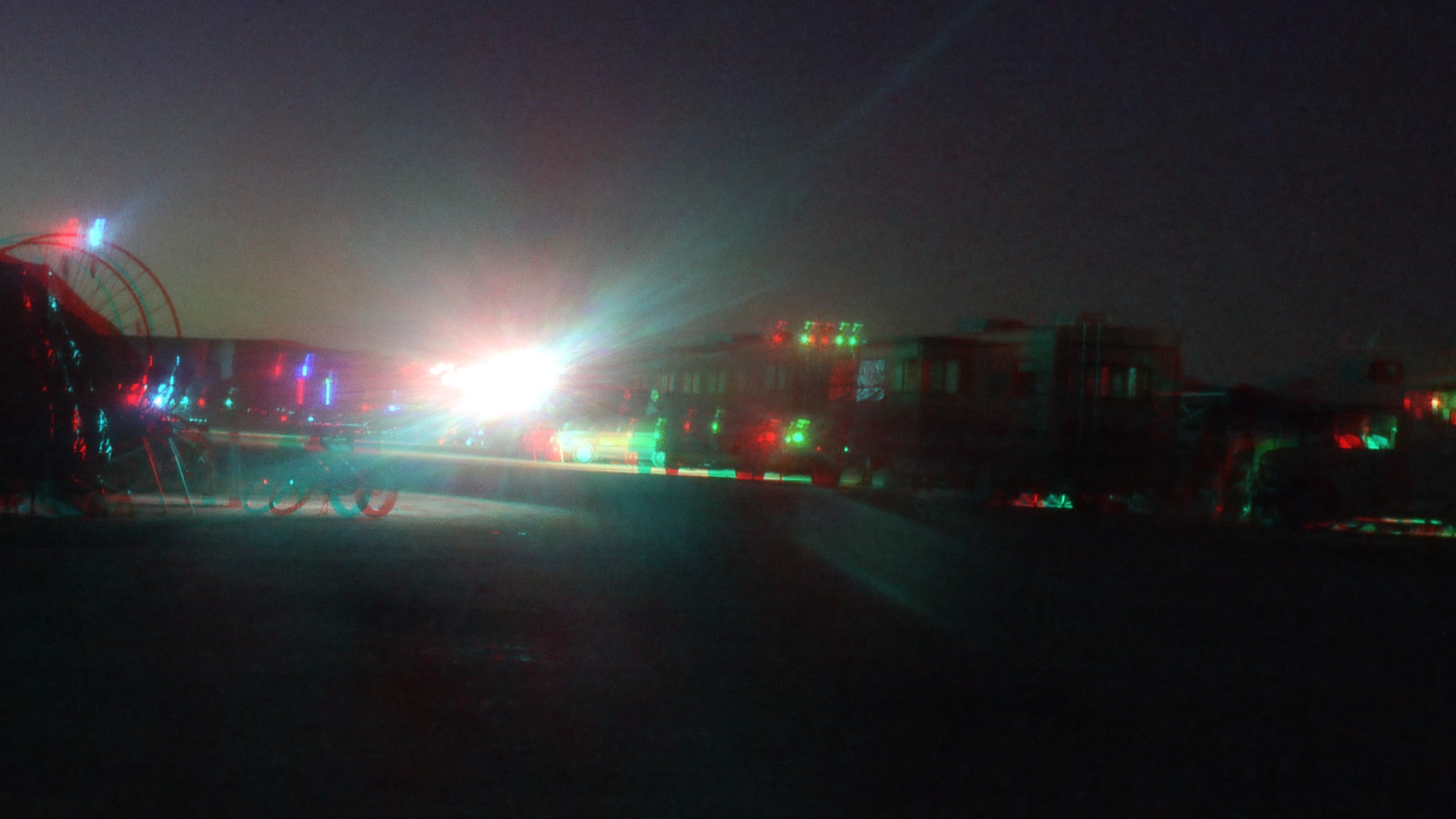 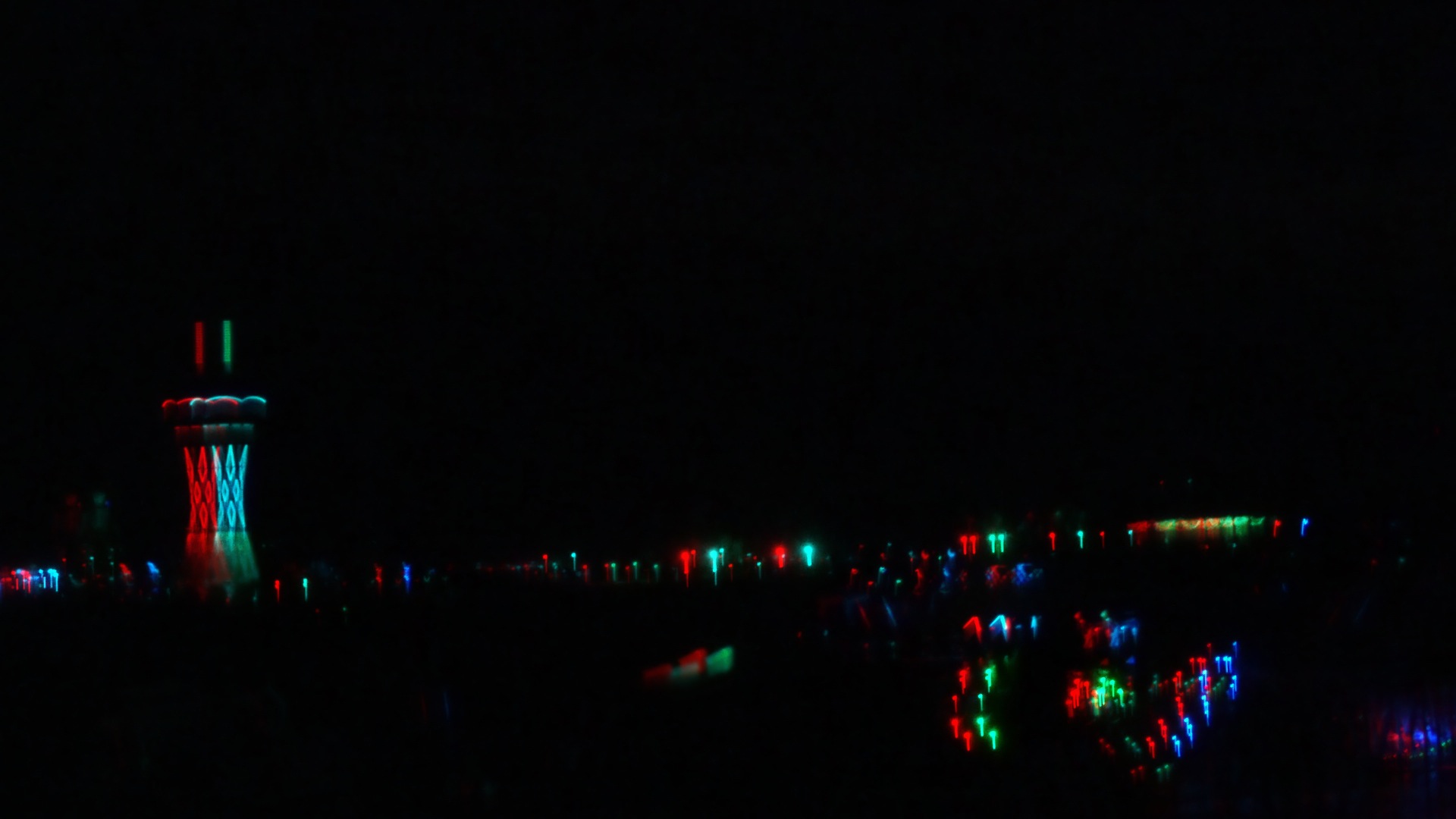 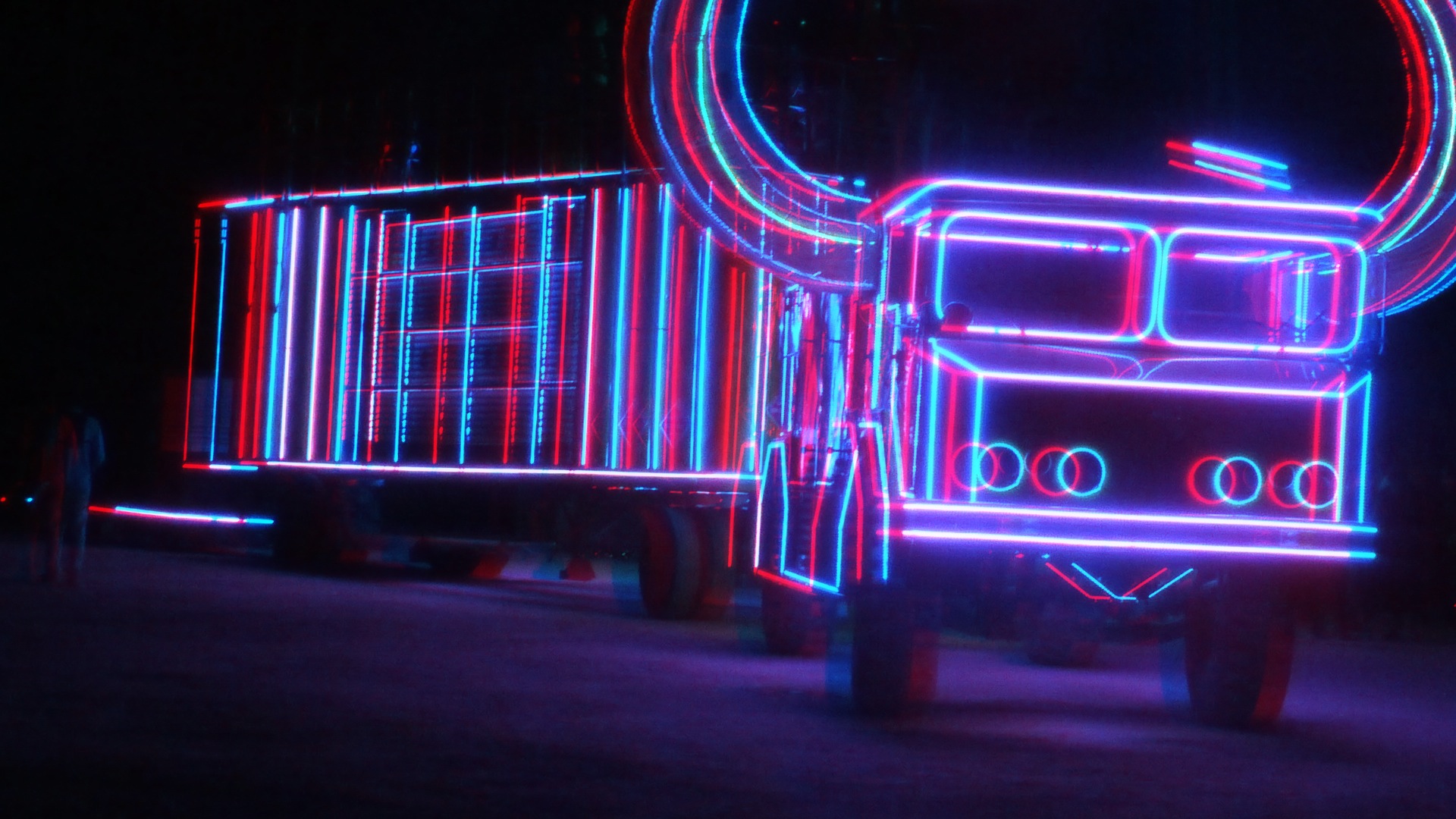 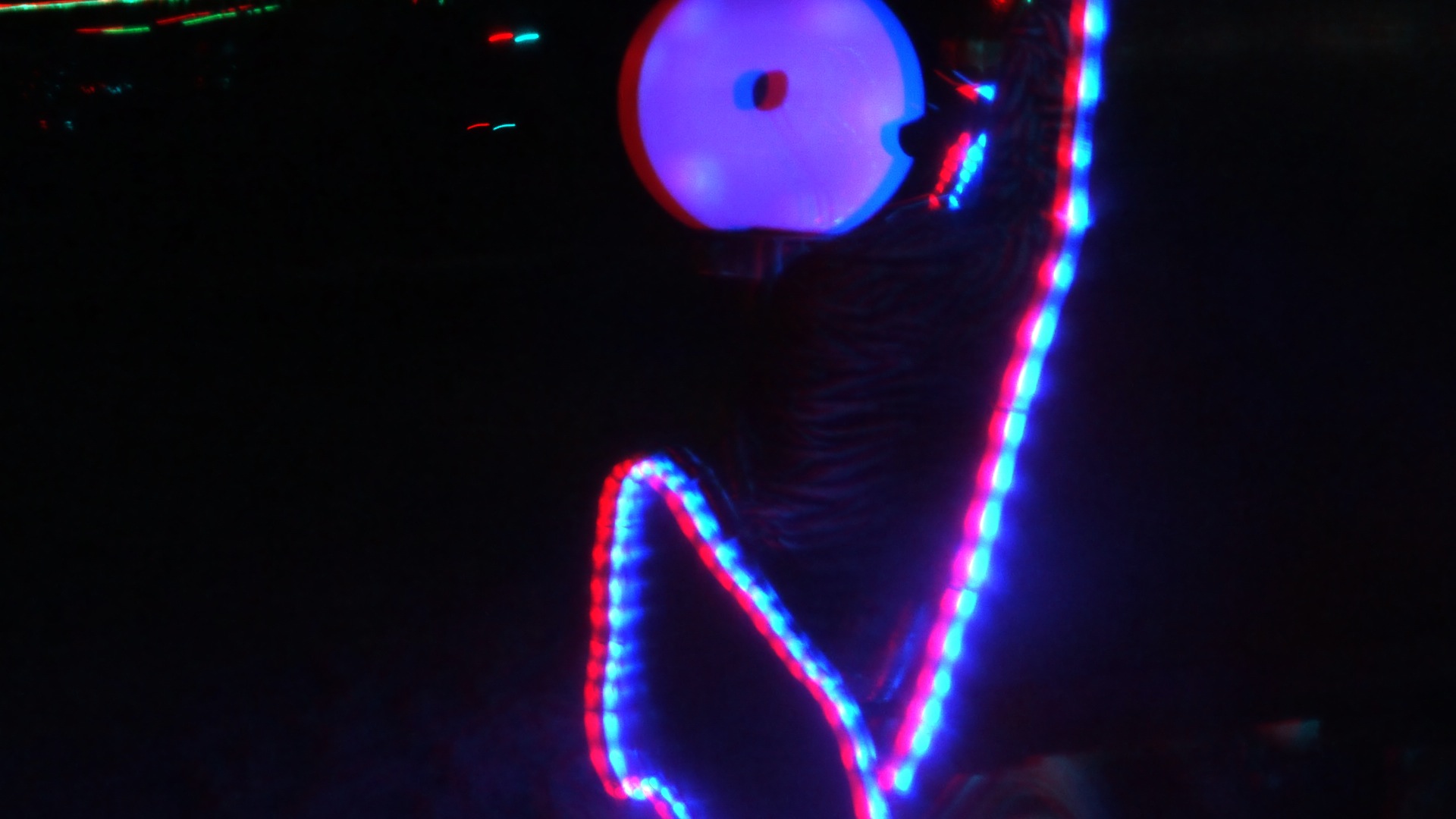 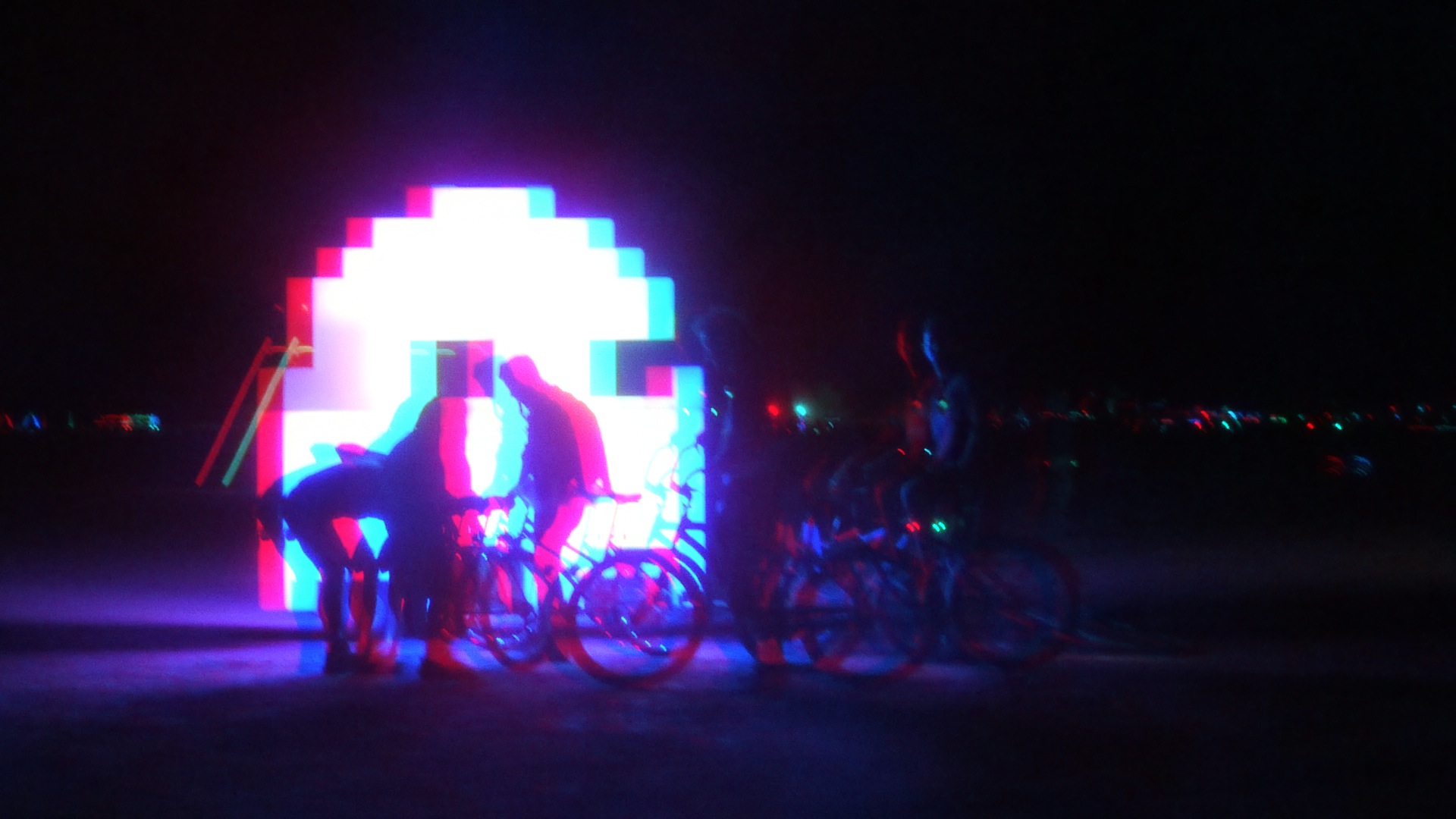 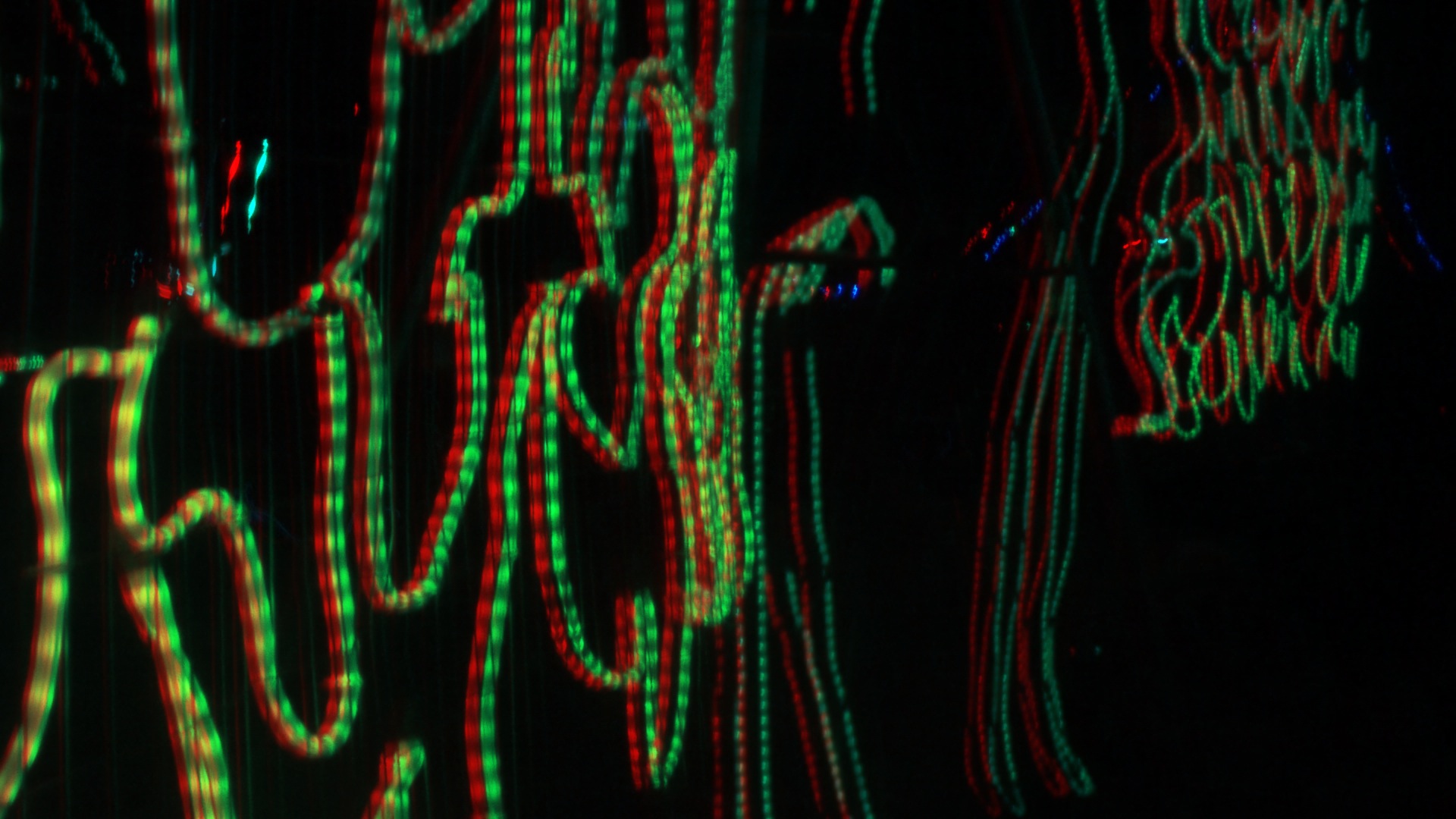 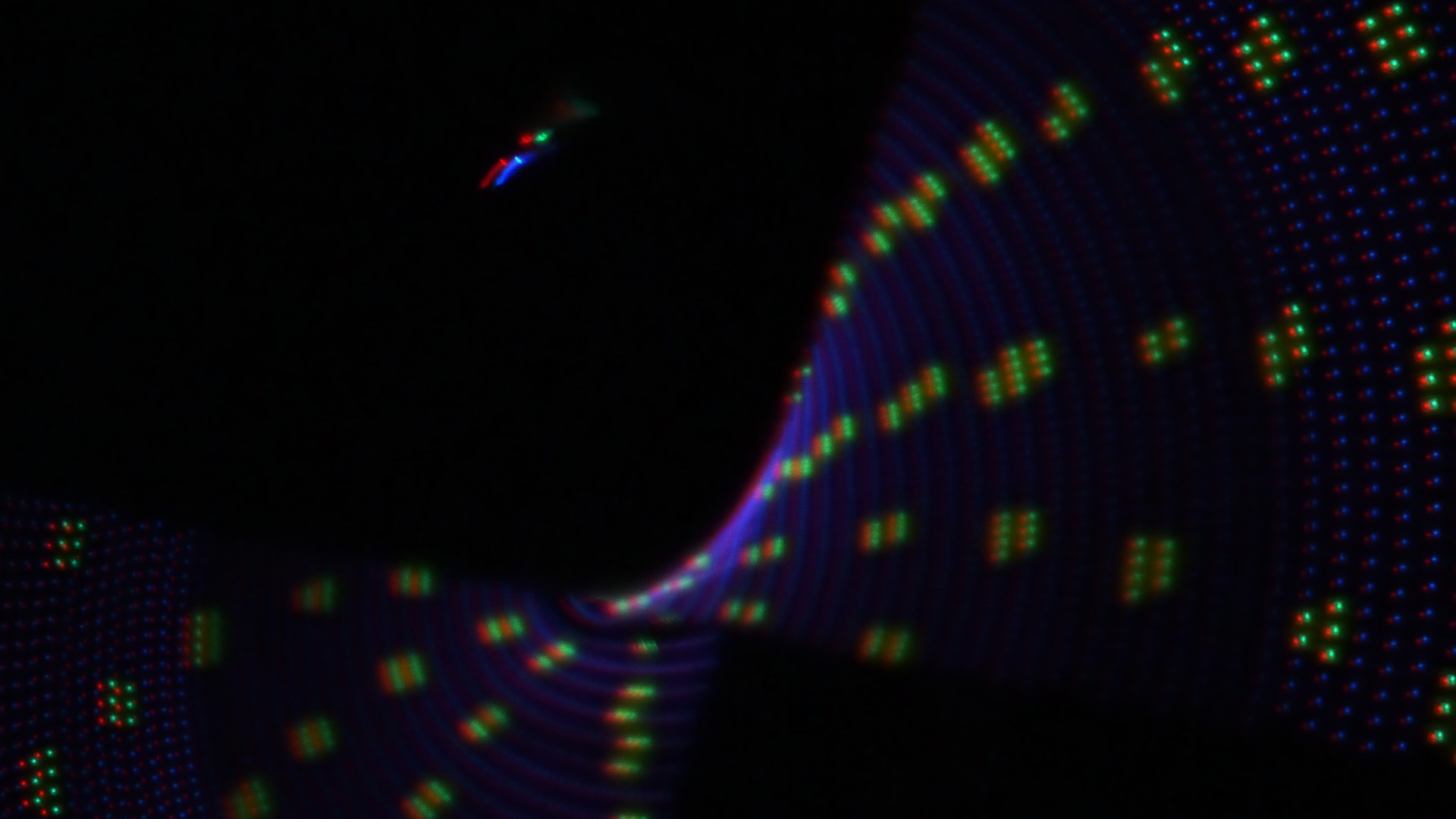 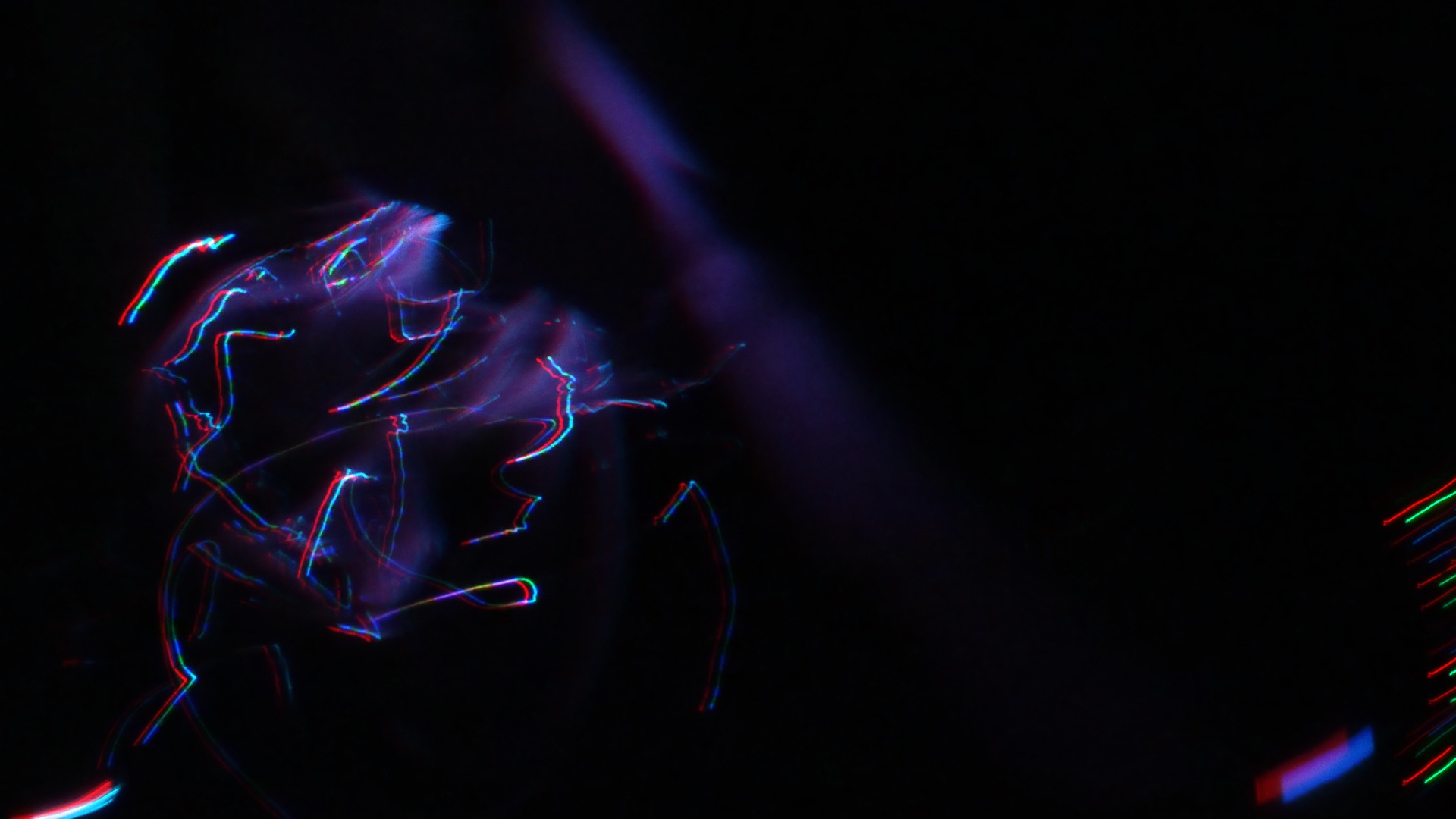 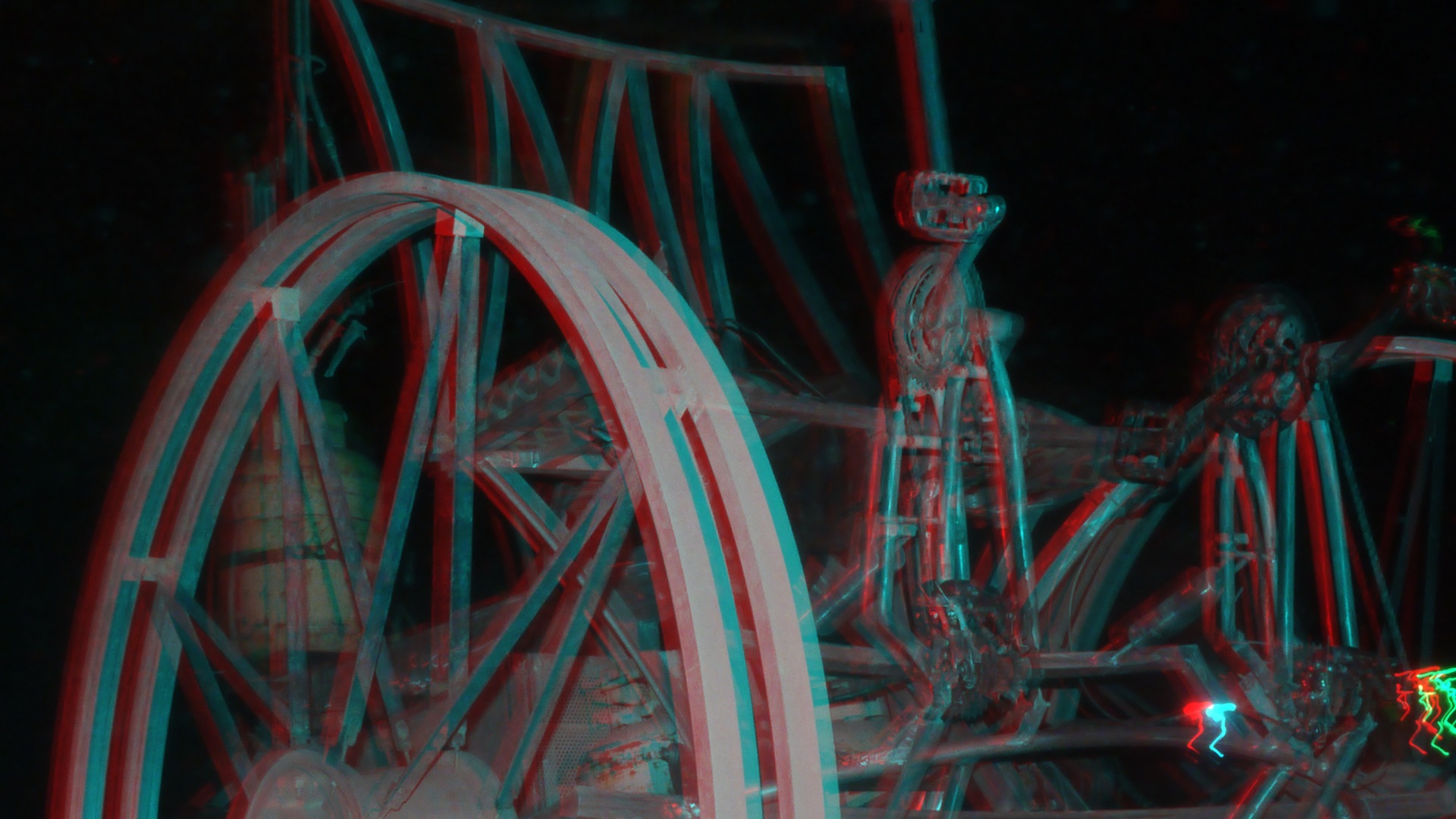