When I first moved to Cincinnati, and a few weekends since, I took to rummaging through the vast….vast lands of recycle centers. There are many fabulous things about recycle centers. The turnover of products. The cheap prices. The maze that is the warehouses in which they are housed. But on one particular journey, my roommate and best bud Donovan happened to spy what we both thought was an Eames Lounge chair sitting back by a desk amidst the piles of forgottenness. It was a quick glance. We both shot loks at each other and ran to find someone who could give us a price. “Oh that? Yeah I’m not sure if the owner is sellin. Says it’s the most comfortable chair in the world.” After firing back with an “I’ll bet.” Donovan left his number and we traversed back home, discussing what could have been. A short time later, a call came back, “$100 and it’s all yours.” We drove straight back. 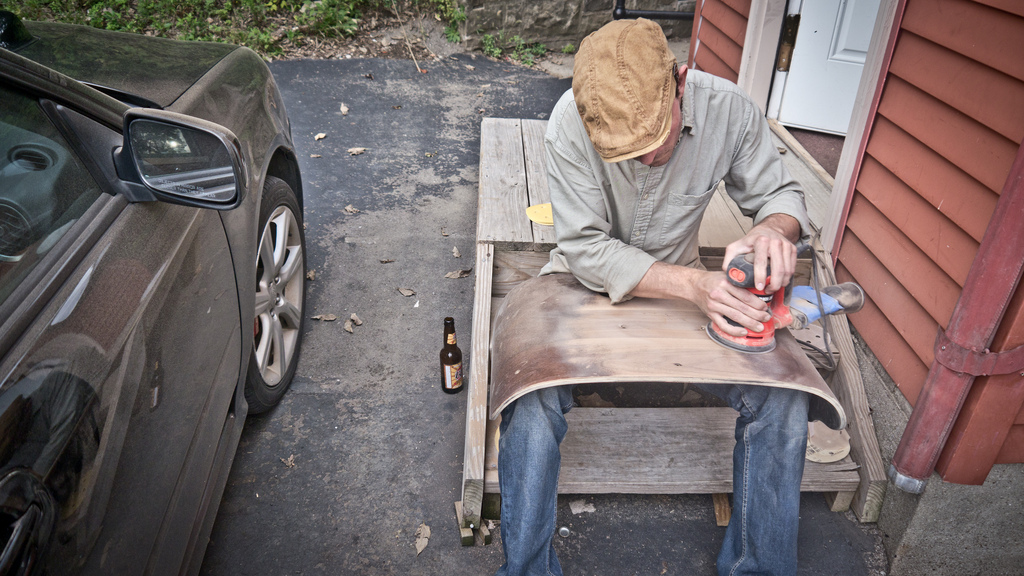 Donovan starts down the long road of sanding.

Upon arrival and picking up the chair, it was immediately apparent that it was not in fact, an Eames, but one of the many knock offs. Which one I wasn’t quite sure, but nevertheless, this could be a fun project to start my journey into furniture restoration. It’s pretty apparent what types of personalities Donovan and myself are, as shortly after arriving home, he began to disassemble and I started Googling. We both found some rather amazing things. Now for those of you looking to “go Eames” there’s a few quick tricks to tell you if it’s authentic or not from afar. Rule #1: It’s probably not. Especially if you are in a warehouse in the outer skirts of a mid-western villa. Rule #2. Price should tell you. With the advent of the internet, it’s becoming increasingly difficult to find “steals” of anything. Even backwoods hoarders know that with 20 minutes and a cell phone they can price out pretty much anything, even if they see that desperate glare in your eye. And finally, Rule #3. You can see how it’s assembled. The true power of Eames furniture is the seemless ways in which all the pieces come together. It’s the detail work. No screw heads, no bolts, not even stitch work can be seen at first glance, or the second, and sometimes the third. It’s really those details that you are paying for. The beautiful craft in assembly. So it’s ironic really that most knock offs come from a company called, Plycraft. 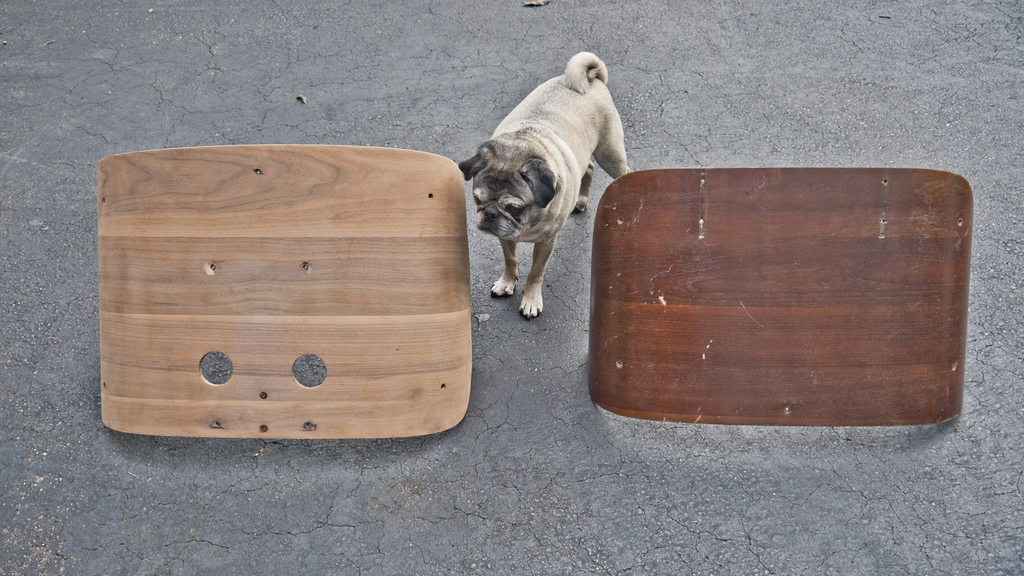 The sanding process takes time. Thankfully. As Donovan was removing decades of horrible finish, I was diving into the exact material that Plycraft was using at the time. Now, here’s more of that “detail” work that makes an actual Eames an Eames. The finishing layer of an authentic Eames varies but it’s typically very expensive, and very rare, think Brazilian rosewood. The Plycraft is much cheaper in quality, think Cherry or Walnut, and the top layer is much thinner, so one MUST take care during the sanding process. We started with a 220 grit, and quickly jumped up to 400-800-1200 respectively. This was a process for sure but completely worth it as the true wood finish began to pop. A major hold up during the sanding process was the edges. Our lovely littel Plycraft edges were painted black. Painted. We decided to try to bring it down to natural wood. This was difficult on many levels. A. the black paint was heavy, hand sanding was the way we should have done it, but it would have taken months. B. the top veneer is so thin that powered sanding can easily damage the finish. So this step was stressful. With enough determination however, the original layers of plywood were exposed, and while not the most elegant of coloration was present (now I understand the painted edges), I was sure we could get the edges to “pop” in the staining process. 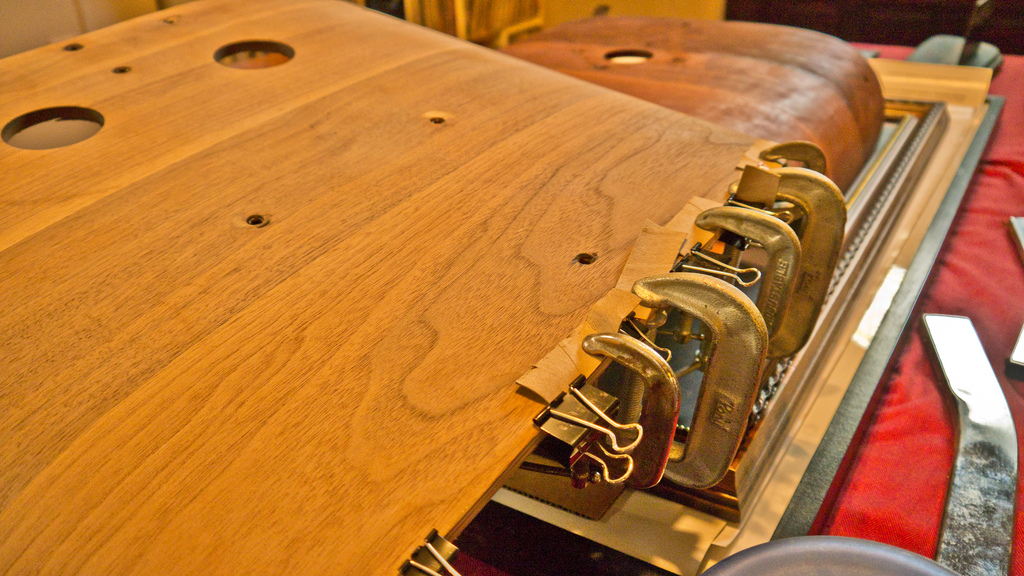 Repairing some of the layers that were separating

Soon we were onto staining. There was much debate here, but we both agreed that we wanted the natural wood grain to pop moreso than the horrifying finish we just removed. I believe we ended up going with an Minwax English Cherry, I can go back and find it if you are all that interested, but we thought it would go well with the black leather that we were not going to change. We kept the black for a bunch of reasons, mostly hardware related. The cushions and material turned out to be in fantastic condition. I simply treated the leather a bit and it came back to life. Donovan got new foam as the old was plenty worn. The original was roughly 3″ and I believe we tried to double that, thinking it would be more comfortable. Don’t do this. Shoving more cushioning in actually turned this into the most uncomfortable chair in the universe. Upon placing your posterior on it, it will quickly slide off. Stay in the vicinity of foam thickness that your chair comes with. again I think it’s somewhere around 3-4″. 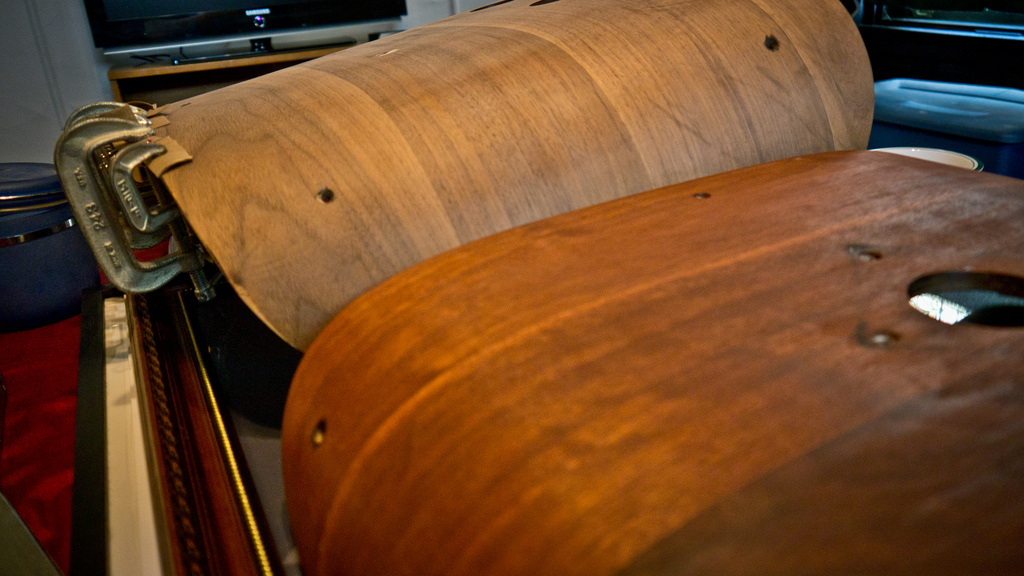 Once the stain was set on the three panels we took to giving them a finish. Again, we wanted as much natural as possible, so we decided to go with a matte for the panels, but to help out the coloration on the edges we went with gloss. The edges took some experimenting, what ended up working out quite well was dousing a rag with stain, and running it quickly around. This helped pop the different grains alternating color even more, really enhancing the layers. The gloss hit was roughly 2-3 coats taking care not to get it on the sides. I do wish there was more coloration difference between the stained sides and the edges, but truth be told the black paint was just hiding some bad quality wood. We even had to reqlue some of the layers in places, and fill in some spots with wood filler. By staining it slightly, we were able to hide a large amount of imperfections. The pop gloss also throws some glares around on the edges, consealing them as well. 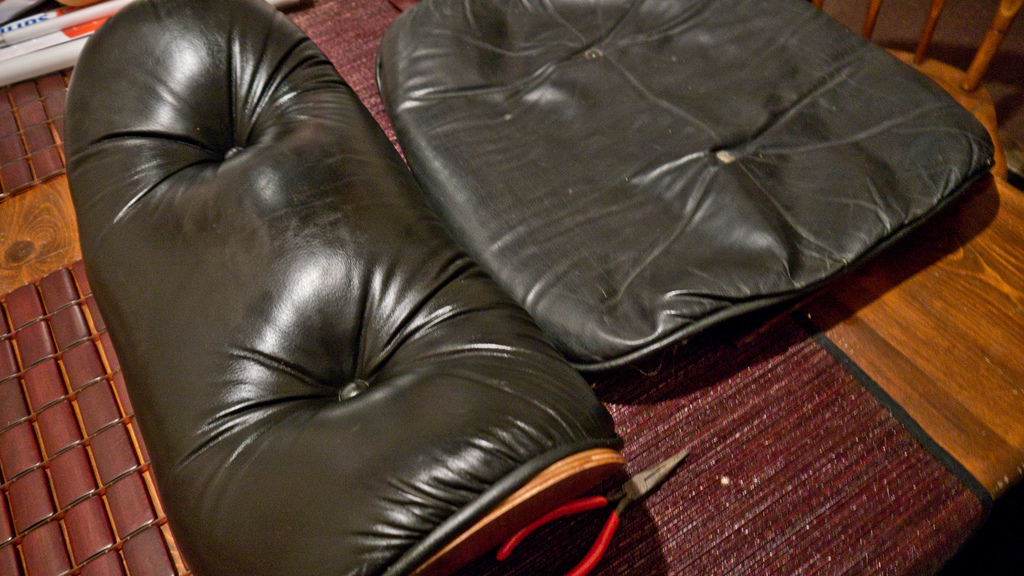 The final pieces that needed some care were the actual pieces of hardware. Again, devil’s in the details. There are two chrome arm bars that attach the head piece to the torso, as well as the two bases. It actually need a new tilter as she slightly leans to the left. But you can find any replacement parts for Plycraft, here. Originally my thought was to Frankenstien together actual Eames parts with the Plycraft. Don’t do this either. Let sleeping dragons lie there. Not to mention that even those parts are in the hundreds, and “not fitting” is “not an option”. Mainly I was trying to convert the arm rests with the full curved pieces. I was also hoping to find some head panel supports with rubber feet (hey I love the Eames detail work). But none of those parts would retcon easily into a Plycraft. No, in the end I got a buffing kit for my power drill and polished the crap out of the chrome. A little matte black spray paint on the rest of the hardware helped hide things nicely. We even found some inset washers to help compliment the exposed screw heads adding that little touch of detail work. Hey, if it’s not an Eames, be proud and falunt it a little. All in all the Plycraft isn’t a terrible chair at all. It needs a little love and conditioning, but I would say we spent roughly $100 bringing it back to life; add on the original price of $100 and we saved $4,800 while trying to look like we live in a designer home. 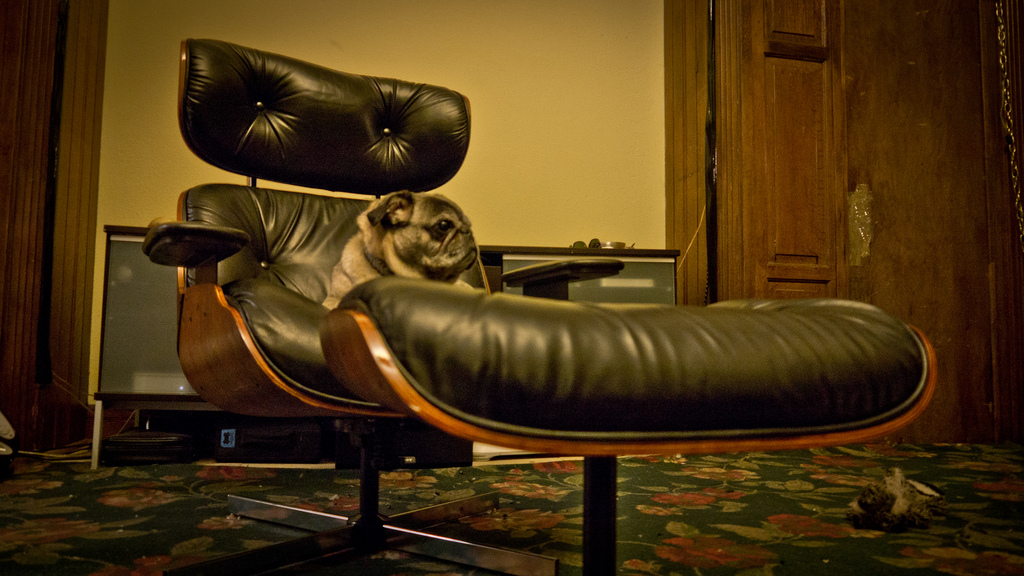