The idea of collaboration. Teamwork. Companies often proclaim this as the reason for their impact on the marketplace. Their is no doubt that combining unique backgrounds and ideals and upbringings bring a unique quality to an idea. But just as things can go so good, they can also go so bad. In 2009, UArts, a multidisciplinary art school in Philadelphia, tried a little experiment. They attempted to combine departments, on joint projects for a period of 6 weeks. The results were, interesting. Instead of each student using their unique talents to bring perspectives to fairly standard real world problems, they struggled. The ideas were stifling, and in the end, students lacked the resolve to really come together as teams.

It makes sense. Companies go through processes to see if you are a “good fit”. As not everyone can flourish in certain atmospheres, but me and a few other classmates found this interesting. Why did some students react so negatively? Why didn’t they try to pursue the answers using their own skills? Why couldn’t we all just get along? While there are many directions this could have gone, ours took the route of Collaboration, in a localized art school environment. While attending the University of the Arts for, well, over a decade now, it became abundantly clear that even though the campus offered a ton of varying disciplines, none of those disciplines were really crossing over, and collaborating on projects together. Theater students were forbidden to talk to the Film department, Graphic Designers and Industrial Designers were having an all out pissing contest, and the fine artists lived happily content not acknowledging anyone else’s existence in their own little studios. Well it’s time for a change.

Over the course of two months, we interviewed students. Tried various methods of communicating with them from flyers to posters, to taking their pictures and installing a giant television screen right as they walk in the door. We began to look at how people discover information and spread it amongst each other. Then, we put on a show. Literally. 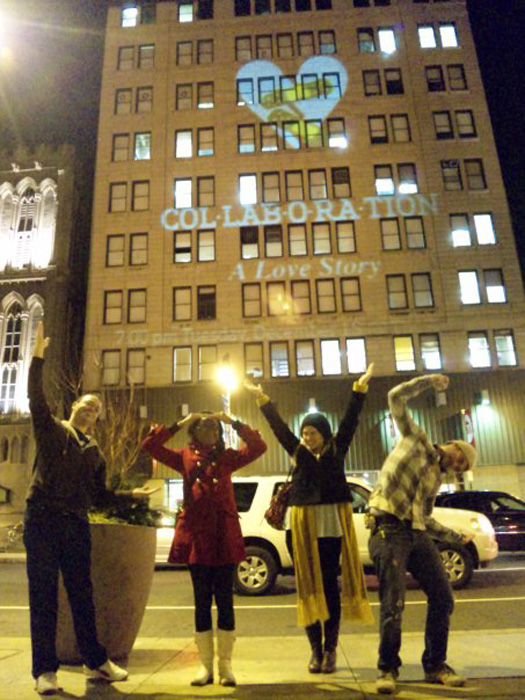