Respect the sport, see the science.

Cadence Cycling is not your typical cycle shop. While super road bicycles and apparel are the priority, Cadence focuses on making you the perfect athlete. With training and testing onsite, your dreams of stepping up from a weekend warrior to a full on triathlete are mere feet away. The triathlete is a special kind of User. They study a lot of technique, and precise movements. They know their body down to the centimeter, and how it reacts to certain products and conditions. The line between sports and science, blurs. So in the approach for this campaign, it was about bringing this thinking to light. The evolution of man from nature and into a powerful, precise machine. The linework revolved specifically from the photos of actual Cadence trained triathletes, who helped guide how the forms should emit from each pose. Natural curvature and alignments brought to the forefront to emphasize mechanics. SCIENCE!

Beyond the typical ad campaign work (print, web, posters, sprinter van, etc), Cadence was looking to celebrate the opening of a Tribecca location. So we thought, since they had the testing facilities for running, biking and swimming, what better way to show off their services, than hosting an actual, in-store triathlon? Alongside a partnership with Triathlete magazine, a contest was formed. The winner was to receive a full year of training by Cadence, equipment, and a chance to run in Kona, all the while being documented by Triathlete magazine. Thousands entered. 100 entrants were carefully selected, and over a 2 day competition in the Tribecca location, 100 became 10 became 2. 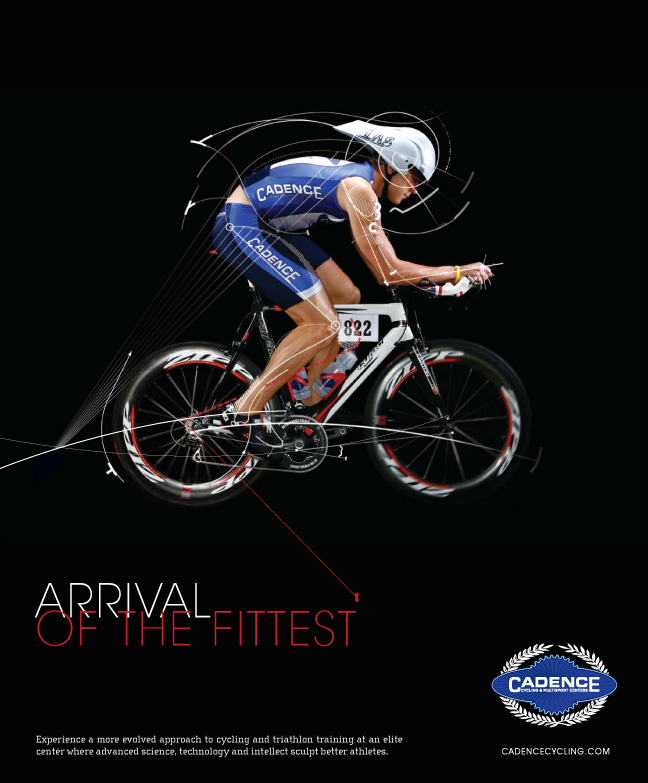